This article, by Adrian Bottomley, recounts a first foray expedition into the sacred peaks of Golok in eastern Tibet and was published by Action Asia magazine in 2017.

"No special lake,” repeated Kelsang, our horseman, his bloodshot eyes holding my bemused gaze. “But a lake doesn’t just disappear – it’s called Fox Call Lake, and its right here on Google Earth,” I said, pointing at my map and wondering what sound a fox actually makes. I also recalled another disappearing act the previous afternoon, when Kelsang had vanished into the thin mountain air, along with all our gear, by inexplicably choosing to make camp behind a distant bluff that had obscured him from view. I watched him slowly dismount, flashing his gold-toothed smile, and lie down on the carpet of wildflowers to light a cigarette. Clearly, neither he, nor the sacred peaks of Golog, were about to reveal their mysteries in a hurry.

For a number of years, l had heard intriguing reports of a spectacular, unexplored mountain range in western China, straddling the border of present-day Sichuan and Qinghai. Known in Tibetan as Nyenpo Yurtse, after its highest peak (5,369m), the labyrinthine range was steeped in the mythology of the Golog tribes of eastern Tibet. According to some scholars, it was believed to be the birthplace of the legendary Gesar of Ling (a sort of Tibetan King Arthur and hero of the world's last living epic). The sacred peaks were also reputedly worshipped as the topographical representation of a secret mandala associated with the most important meditational deity in Tibetan Buddhism, Chakrasamavara.

By July 2017, plans for an exploratory expedition to these fabled mountains had finally coalesced and I travelled four days across Yunnan and Sichuan to meet up with my fellow explorer, and avid conservationist, Kyle Obermann, in Baimacun, a dusty, one street town northeast of the divine peaks. The lofty aim of the expedition was to attempt the first traverse of the entire range, a distance of approximately 40km. First though, we had more mundane matters to handle, such as how much food we would need for our estimated eight days of trekking, and where to find a horseman and a horse to carry our heavier gear. 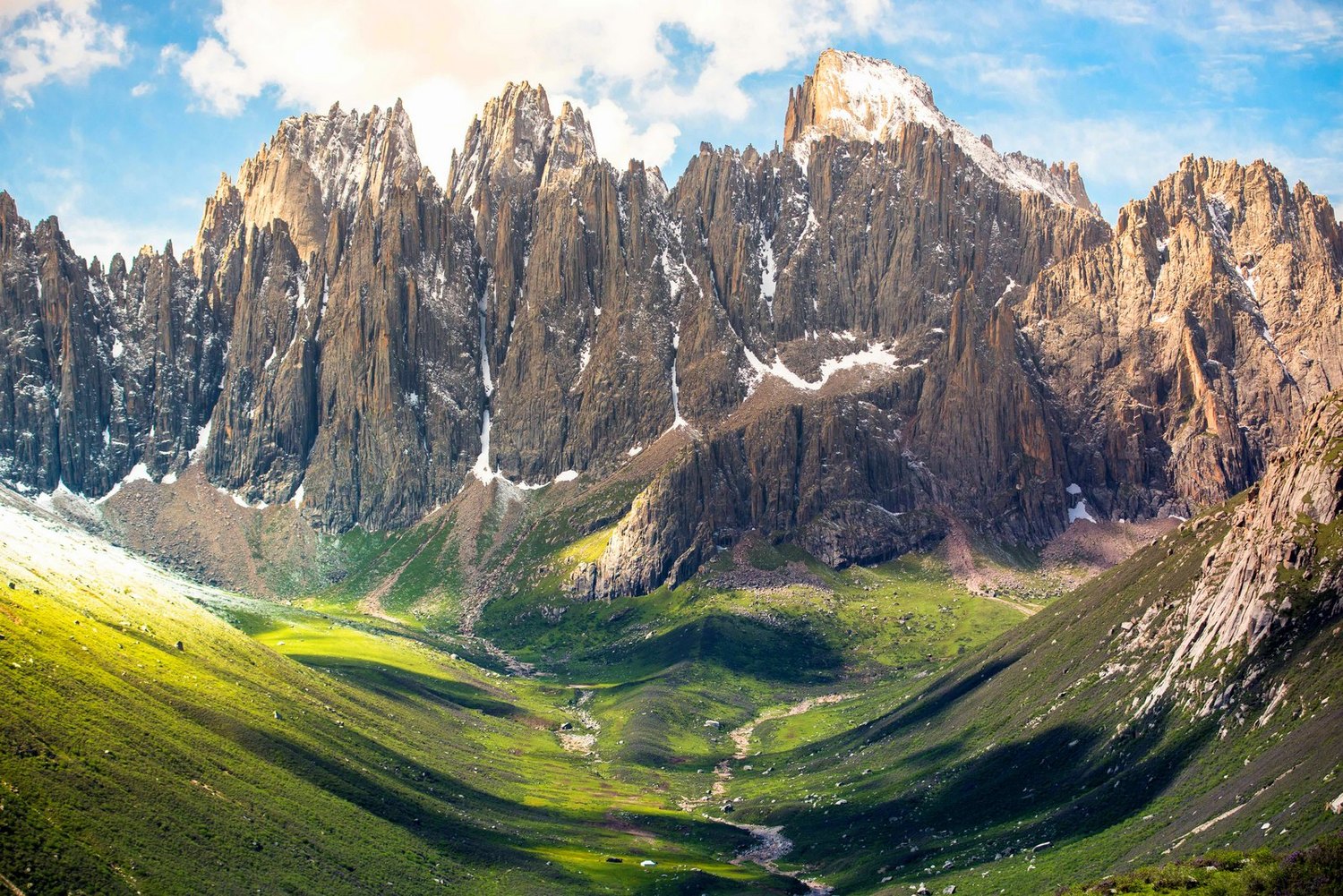 In the Tibetan creation myth, Avalokitesvara, the bodhisattva of compassion, incarnated himself as a monkey and mated with an ogress. In any negotiations, even Tibetans acknowledge that it is their latter, fiendish inheritance that comes to the fore. Having haggled for horses many times before, it is still a painstaking process that often involves sitting through long periods of feigned indifference and awkward silences. Any horseman worth his salt will try and engineer a minimum trip payment at the most inflated rate possible, as opposed to a daily rate, in the hope of rushing you through your planned schedule. There is also little chance they will honour the original agreement. When out in the wilds, the temptation for creative extortion is usually too tempting to pass up, but we had a tentative deal at least, including provisions of a sackful of potatoes, tsampa (roasted barley flower) and dried yak meat. With that to look forward to, we sat down for our last proper meal before heading off into the mountains.

Our dinner companions were two affable Tibetan lamas called Tashi and Gengga. Self-taught botanists, they had quite remarkably compiled an extensive diversity study of Nyenpo Yurtse over the previous eight years. Collaborating with nomadic families to identify rare and protected species, they had meticulously documented over 700 varieties of plants and flowers, including one extremely rare, endemic lilac poppy; nearly 200 birds, including the endangered Black-necked Crane and Tibetan Bunting; and approximately 40 snow leopards. Their aim in this was to encourage the nomads to value the diversity found in their land. Keen to help in some way, but knowing how difficult it is to photograph birds and, well aware of the elusiveness of the fabled big cat, I took the safer option and zoomed in on the poppy.

We set off the next morning from Black Pig Lake, following a meandering stream up through a beautiful glacial valley, framed by hills covered with an overnight dusting of snow. The valley floor was yellow with wildflowers and, as we climbed higher, we began to spot tell-tale patches of red and then purple. Meconopsis punicea, a blood-red poppy also known as ‘Sichuan Silk’, is held to be one of the most beautiful flowers in the world, and while its primary range is described as being a few hundred kilometres to the east, here it was flowering extravagantly.

We snapped a few photos and moved on, under strict monastic instructions to stay laser-focused on lilac. Earlier, to our delight, Tashi and Gengga had asked us, to help map the territory of Meconopsis barbiseta, a poppy that is found nowhere else on earth. Purple, pendant-shaped and typically with a single flower gently hanging from a tall, slightly hairy stem, we had quickly encountered the endemic poppies, and excitedly took the first of many floral GPS fixes, before making camp.

Trying to sleep above 4,000m is never straightforward. There are many impediments to uninterrupted slumber including an enhanced urge to pee thanks to the Diamox (standard issue for symptoms of altitude sickness). On this particular moonlit evening, it was the close attention of countless yaks that did the trick, seemingly hell-bent on munching every blade of grass around the circumference of my tent, and sounding like a herd of wild hogs. I woke up cold and bleary eyed, startled by one of those fleeting, yet crazily vivid dreams familiar to all high altitude travelers.

I immediately set about trying to find the coffee. Still visibly shaking, Kelsang kindly offered me his traditional maroon overcoat, with its comically long sleeves, and immediately started laughing as he tied the yellow sash around my hips. I could see his point. While they looked wildly chic on a Tibetan, I looked like I was wearing Liberace’s dressing gown!

Later that morning we came across the first of the bemou hunters. The local nomads scour the ground for this prized medicinal herb, first finding its small smoke-coloured flower shaped like a lampshade, then digging up its marble-sized bulb. The white bulb is dried and administered to treat coughs and loosen phlegm. My chest was perfectly fine, but when offered a couple, curiosity got the better of me and I chewed and swallowed the bitter bulbs. Despite subsequent extensive research, I still have no idea as to its English name, but I can report that bemou is also extremely effective at loosening the bowels.

That afternoon, after crossing a wild and spectacular pass, we approached the ‘East Gate’, guarding access to the shark-toothed peaks that lay at the heart of Nyenpo Yurtse. Previously, Tashi and Gengga had explained how to most Tibetans natural landscapes are imbued with spiritual power, and that in certain revered places, deities are believed to reside in natural forms. Specifically, in Nyenpo Yurtse, the range’s inner sanctum is thought to be the abode of Chakrasamavara, centred around a lake of such clarity that advanced tantric practitioners were able to see their future path reflected in its waters.

The concentric rings of mandalas protect the central deity, each requiring a heightened level of purity and devotion in order to pass. Our topographical mandala seemed no different and so we entered from the east as belief dictates, tying two blue khatas (traditional ceremonial scarves) around the stupa that marked the spot and muttering a few mantras under our breath. A marmot peeked out of his burrow as we passed through the gate, seemingly unconvinced by our acts of piety.

As we trekked deeper into the mountains, the beauty intensified. There were no classic, hyper-prominent peaks to speak of, but rather spectacular, labyrinthine ridges of serrated rock that towered above snaking valleys decorated with an extravagant mosaic of multi-coloured lakes. The heart of the range lay over a final high pass and, so too we hoped, did the inner ‘lake’ marked on our map.

But these concentric barriers were testing our resolve. Before the top of the rocky pass, we sat down to admire and record another lilac poppy, this time outside of its known range, and were dive-bombed by two huge bearded vultures who swooped out of the leaden sky. On the tricky descent over large boulders, Kyle slipped and badly twisted his ankle. And that night, after we camped where Kelsang had dismounted, denying all existence of the ‘lake’, we were terrorised by a wild Tibetan mastiff which, if it were not for the fact that he was on the other side of a stream, would surely have elevated his horrific hollow barking to all-out attack. I spent another sleepless night, gripping my trekking pole, desperately hoping he wouldn't overcome his fear of water.

The next morning, a young lama dressed in red robes, rode up to our tents and, when asked where he had come from, replied in impeccable Chinese, “The pilgrimage lake, it’s just at the top of that valley”. I looked at Kelsang hesitantly. “Lake, no lake,” he said nonchalantly shrugging his shoulders and once again lay down to smoke. We were both completely foxed.

Climbing up through rhododendron bushes, my mind flew in all directions trying to make sense of it. Kyle hobbled on gamely behind, his ankle still swollen from the previous days fall. And then there it was. A lake, its aquamarine waters rippling in the breeze that blew up the valley to also flutter the prayer flags adorning a chalk-white stupa that marked the headwaters. I half-imagined big cat royalty, flicking luxuriously long tails, gazing down at us from their snowy abode, as the sweet smell of burning juniper wafted from a nearby offering that must have been lit by the young lama.

A pervasive peace reigned over a scene so extraordinary that it seemed perfectly possible that it had inspired legends. Like that of Gesar of Ling: a warrior born of a union of a father who was both sky god and sacred mountain, and a mother who was the goddess of water. I felt a poignant urge to just sit by the water and reflect. The impulse to explore was gone for now, my restlessness stilled. Kyle was similarly quiescent, transfixed by more than just his heavily bandaged ankle.

There were no profound karmic revelations to be seen, nor for that matter, any foxes to be heard. There was just awe-inspiring wilderness and vast open space, the kind that demands you experience it with all your being, and allows for a more natural state of mind to emerge.

Perhaps Kelsang hadn’t been keen to encourage us come to this spiritual place. Or perhaps his point was more subtle: that there was nothing transformational about the lake. ‘Lake’ or ‘no lake’ was immaterial. Either way the place felt charged, its beauty and tranquility all the more profound for the journey to reach it; learning to treasure the poppies along the way.

If you prefer to view the original article as it appeared in Action Asia magazine please download the following pdf.